When I followed the of counter terrorism training in Australia, all the participants asked me about the progress of the bali bombing the court of and especially about amrozi, the smiling bomber, first I didn’t understand why they mentioned him that name, and after i saw the local tv indeed in a masif manner presented the Chief Police of Republic of Indonesia (at the time) jendral dai bahtiar spoke with amrozi in Regional Police Bali, and very visible amrozi as a suspect in the bali bombing sat in a relaxed manner and often smiled like a celebrities in contact’s agenda with the fans.
Gee !, that significantly caused the hard response from the Australian citizen, they questioned why one bomber suspect and resulted of many casualties (most Australians) could appear facing the press innocently, without the sinful feeling, and that most painful their heart he appeared to smile and waved the hands to the press like a person celebrities, this continued to be turned in the mass media and local television and presented the citizen’s Australian comment that toned hatred against Amrozi, I myself had difficulty responding to him, whether the person smiled was the violation? the picture indeed was expected by the Australian viewer are Amrozi that hanged down sad the empty view as though really regretted his action…..And other funny stories: one of my friends police Victoria he was called the amrozi because of liking to smile, his personality indeed was friendly, so becareful if liking to smile in Australia could be you were called the Amrozi. 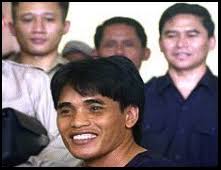